The rectangular version of langtons ant has a very interesting property: The ant will, after some time, always build a highway, meaning it will embark on an endlessly repeating pattern that takes it farther and farther away from the origin. I was curious whether it was possible to build a highway with the ant walking on hexagons. The rules described in the post below seemed to generate a symmetric pattern around the origin, but not a highway going into a specific direction. The original ant also has a couple of variations involving multiple colors. The idea is that instead of switching between two colors, the ant would cycle a tile between a list of colors, each assigned with a specific direction the ant will take when entering the tile. The following graphic shows all the directions the ant can take when entering a hexagon, relative to its original direction (marked with a red arrow).

Each direction is assigned with a name. The names are left, right, forward, backward, starboard, port - abbreviated by their initials L,R,F,B,S,P. A specific set of rules can now be described with a series of these names. The simple version demonstrated below can be described with the series RL, meaning that the first time the ant enters a space, it will turn right, afterwards left. Now, if we add more colors to the sequence, we can construct longer sequences that describe different behaviors. You can try this in the following tool, by defining your own sequences, and then watch the emerging patterns. Simply type a sequence containing the six letters in any configuration into the input field, press the start-button, and watch the pattern emerge. Some sequences seem to only create chaotic growth, while others do indeed create highways of differing complexity. The gallery of sequences below shows screenshots of highways created by different rules. The code for this interactive version can also be found on my github profile. 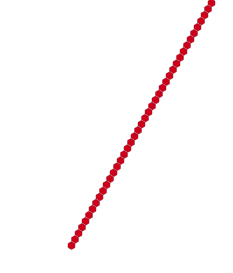 Super simple, and somewhat of a cheat. Creating a highway by rocking back and forth on each hexagon on a line.

A little more interesting - moves around chaotically for a while, but then creates a highway with a sawtooth-like appearance.

My favorite pattern: Creates a triangular glider, that creates a dotted line along its path. Try it out to see it action.

Similar to the previous one, but creates a continuous line along the glider’s path.

Similar to the previous one, but alternating colors on the highway. 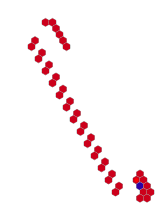 Another highway being build by a glider.

The most complex highway I have found so far. Looks like a sequence of stacked pyramids. 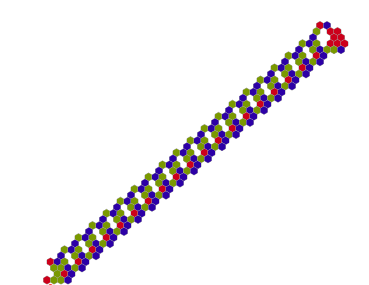 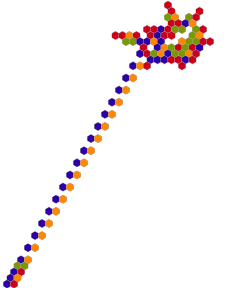 Creates a star-like structure around the origin, then creates a glider that rocks back and forth an creates a series of parallel pairs of hexagons. 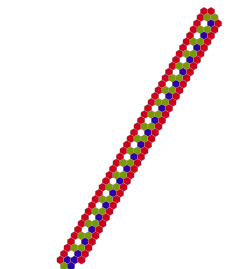 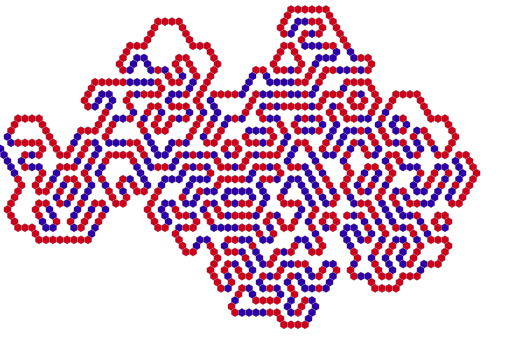 Slowly creates a labyrinth, while constantly shifting its walls. 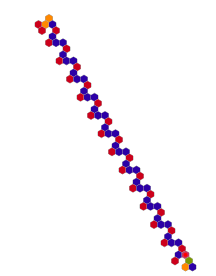 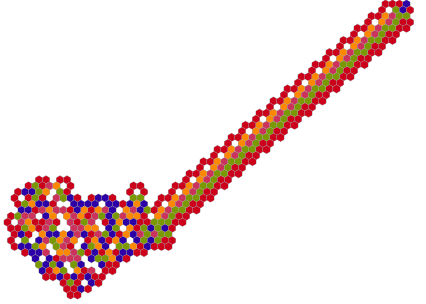 Moves chaotically for a while, then creates a broad highway.

A glider on a highway that builds its own ‘launcher’. 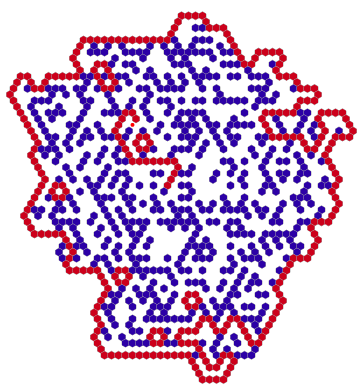 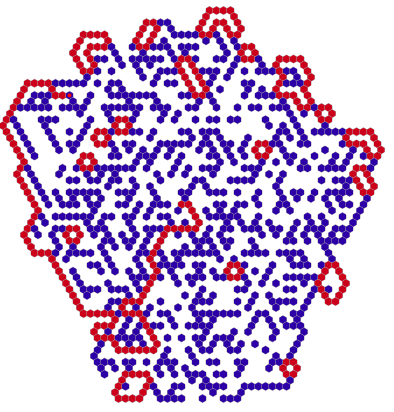 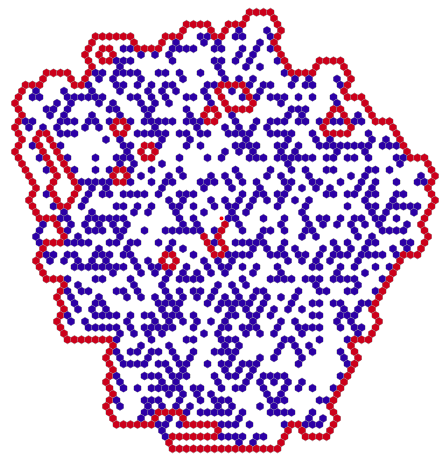 The red hexagons seem to always form closed loops, one of which contains (almost) all the blue hexagons.

All these patterns where found within in a short time through trial-and-error, simply through trying short, random combinations. I have only covered a very small part of the 4-letter search space. If you find an interesting pattern, let me know, I would like to collect a more complete list! mail [at] brtmr [dot] de